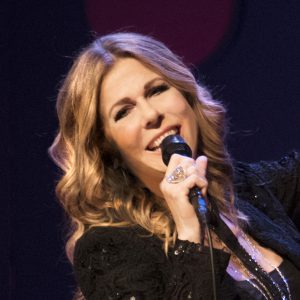 Rita Wilson may be well-known for her acting roles (It’s Complicated, Sleepless in Seattle, CBS’s The Good Wife, HBO’s Girls), and producing chops (Mamma Mia!, My Big Fat Greek Wedding)  but her performance on The Kate proves that this Hollywood hills native has a deep affection for songwriting and the joy that music brings. Rita Wilson charms the audience with her stories of growing up in the 60’s and 70’s; from teasing jingles from products like Charlie Perfume and Jordache Jeans, to her renditions of era classics like “Please Come to Boston” and “Wichita Lineman” from her CD of cover songs AM/FM.   Wilson’s repertoire is varied mixing the influence of California pop on songs like “Girls Night In” and “I’m Guilty”, co-written with famed songwriters for her self-titled album, to a heartwarming homage of the sounds of Laurel Canyon and her admiration for Joni Mitchell. Rita Wilson demonstrates her vocal abilities, love of a good song and sense of humor, including her impressions of series muse Katharine Hepburn.  She encourages the audience to have a good time and come “Along for the Ride”.