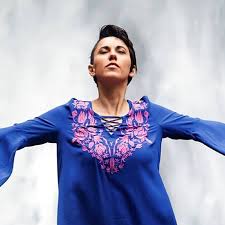 Austin-based Latin pop songstress Gina Chavez and her 5-piece band join The Kate for Season 4! See for yourself what has made Chavez a 10-time Austin Music Award winner, including 2015 Musician of the Year!

“Most striking is Chavez’s ease as she moves between social and love songs, between North American and Latin genres, and even between languages. When she passes mid-song from English to Spanish and back, it’s the most natural thing in the world.” -Boston Globe